We are available 24 hours a day, seven days a week, to answer questions you may have and provide direction. Please call us directly if you require immediate assistance.

Planning arrangements in time of need can be very emotional and stressful. Consider beginning the planning process online, from the comfort of your own home.

Leave a condolence, share a memory, post a photo, light a candle and more with our beautifully designed interactive online tributes.

Follow this link in order to read articles intended to guide one through the grief process.

We stand behind our reputation and will continue to serve our community with the values instilled by our staff.
You may also download .pdf copies of the brochures prepared by General Manager Linda Fitches. 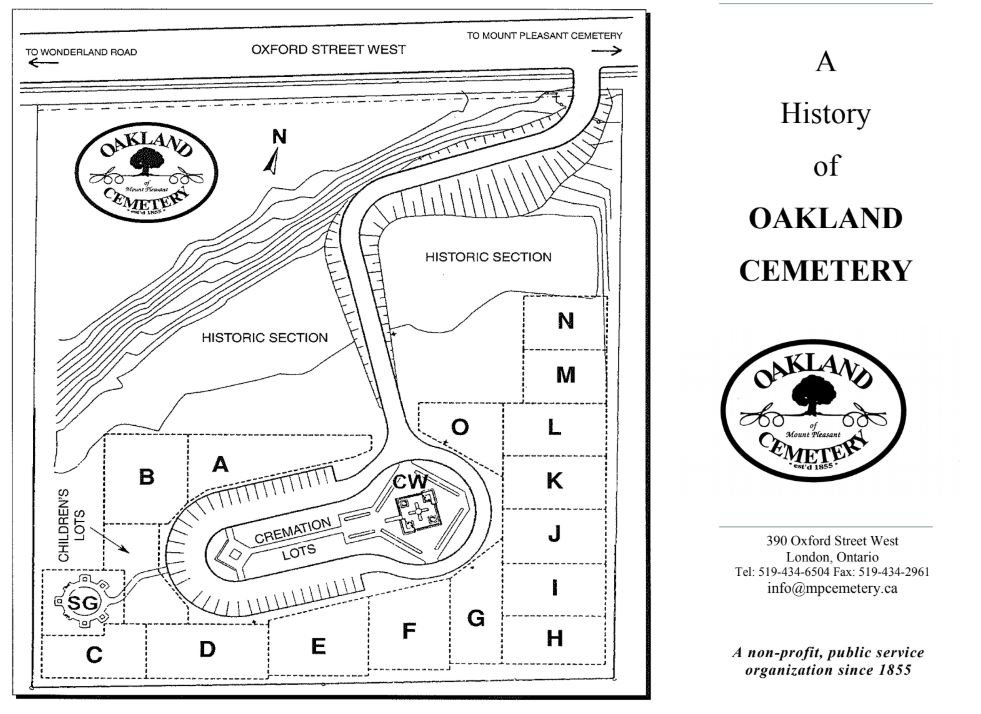 Oakland Cemetery was instituted as a Cemetery in 1855 by the United Presbyterian Church Congregation on the west side of the site. In 1864 the Wesleyan Methodist New Connections Church established its cemetery on the east side, and in 1882 the two groups amalgamated their holdings into Oakland Cemetery, also known as the Scotch Cemetery and Proudfoot Cemetery. The cemetery was left unattended and neglected for many years, except for the efforts of Reverend Elson who tried to clean the cemetery up in the early 1950’s and Oakridge Secondary School students who undertook Project ‘75 with another clean up.

Mount Pleasant has gradually cleared the area of brush and poison ivy. In 1994 Mount Pleasant undertook a major project of cutting into the side of the steep hill to permit a road access from Oxford Street West into the cemetery, restoration of the old monuments, landscaping and laying out of future burial sites and the building of a beautiful Columbarium for the inurnment of cremated remains. It should be noted that John Cram QC, who was a Director of Mount Pleasant for over 20 years, was a major driving force of the Oakland Cemetery restoration. Unfortunately, Mr. Cram passed away during the construction and restoration of the cemetery. Fittingly, he was the first to be laid to rest in the new Columbarium.

All historical burial and lot record were destroyed in a house fire many years ago. While no one knows the exact number of interments made, because of the practice of unmarked graves, the estimates range from 350-574 burials. The only records on file are the names recorded from monuments in Project ‘75 and a recording the Genealogical Society performed.

The following is a list of some of the more prominent Londoners laid to rest in Oakland Cemetery:

Peter ELSON
1839—1899
One of the first supporters of Hyde Park Methodist Church.

Frederick HUTTON
1793-1878
Hutton Road and Hutton School were named after. 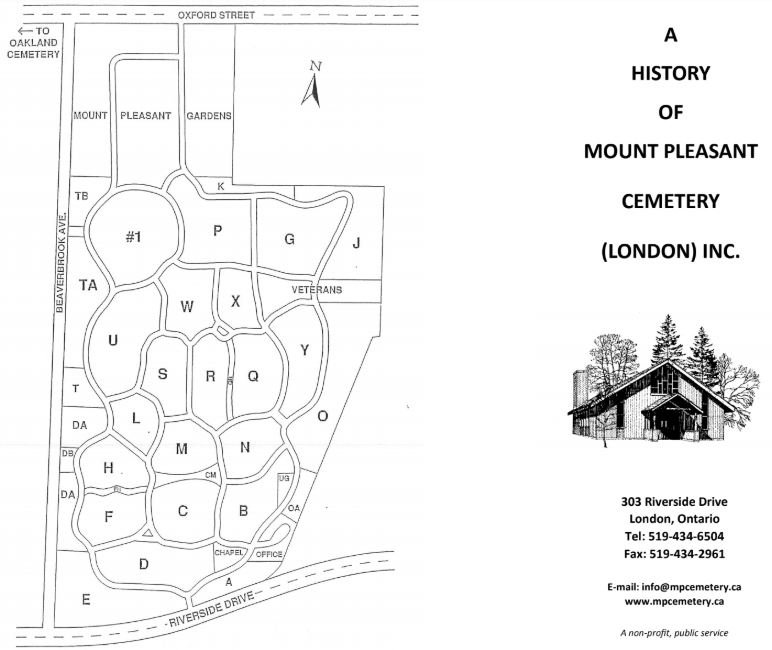 Mount Pleasant Cemetery was established in 1875 by a group of London businessmen wanting a nondenominational cemetery. The cemetery Is still run today by a group of business people (all lot owners) who form a Board of Directors who volunteer the timethey serve on the Board. An annual meeting
is held in the Spring of each year when all lot owners are invited to attend. The Chapel and Crematorium were built in 1971 to accommodate the changing needs of families.

The oldest sections of the cemetery are Sections B, C and F. Here you will find memorials to the Carlings (Sir John Carling, original member of Canada’s first Cabinet);Dorothy McClary “a niece of John Adams and cousin of John Quincy, 2nd and 6th Presidents of the United States”; Simeon Morrill, first Mayor of London Town; Dr. William Saunders, first director of the Experimental Farms Branch, Department of Agriculture and one of the founders of Mt. Pleasant; Sam Peters, Mayor of Petersville; and McCormick family of McCormick Biscuits.

Throughout the cemetery you will find other well known London names such as Silverwood, Eccles, H.B.Beal, Ivey, Dowler,Duffield, Hobbs and the Little family mausoleum to name a few. You will also find monuments of the victims of the Victoria Day Disaster, 1881, including the unmarked plot the cemetery donated to those families who could not afford monuments. Of particular interest is a double memorial to William

Glass and Fannie Cooper, two young people that were to be married who were victims of the boat disaster. Their monuments are on their respective family plots, but linked by a double arch interesting monuments are: John Eskdale who lost his life in a fire in 1855 (the original monument was installed in Oakland Cemetery but is now illegible). His brother firemen erected a memorial surrounded by a metal fence with fire tools on the fence; Samuel Peters, early surveyor; Robert Carfrae, builder of the jail; Princess Amanda, wife of Charles Wetherbee, “daughter of George IV.” A financial statement for the year 1894 included receipts of $2,618.88, Wages $1,039.05, Telephone $44.66 and Postage $3.00. Number of lots sold 55, number of burials 274.

The entry gates at the (formerly) Walker Street entrance were originally installed in 1904 at a cost of $1,200.00, then relocated to (formerly
Mount Pleasant Avenue) Riverside Drive in 1927. The gate posts at the Oxford Street entrance were built and officially opened in 1959. The Cross of Sacrifice in the first Veterans Section was built in 1921.

Mount Pleasant Cemetery is also known for its beautiful assortment of trees including some rare species that are characteristic of the Carolinian Zone, e.g., cucumber tree, tulip tree, Osage orange and redbud. As you enter Mount Pleasant Cemetery from Riverside Drive you will be greeted by a magnificent Copper Beech tree. If you visit the cemetery in late April you will see two beautiful Magnolia trees in full bloom in front of the Chapel, not to mention the spectacular colours throughout the grounds in the fall. In the early 1980’s Mount Pleasant took on the abandoned Oakland Cemetery was re-opened with new burial options. 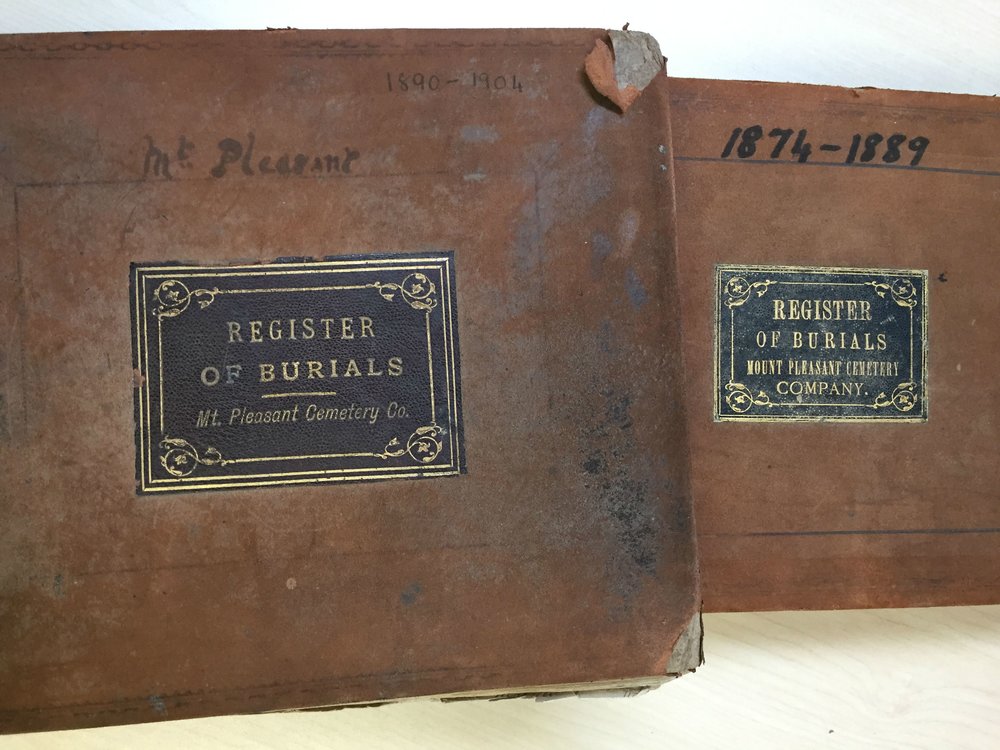 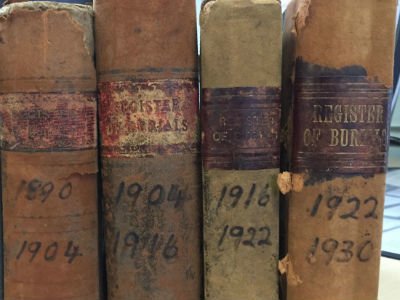