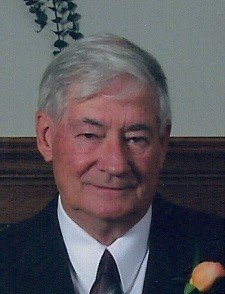 Gerald John (Jerry) McGrenere It is with immense sadness that we announce the passing of Gerald John (Jerry) McGrenere on Monday July 27, 2020 at LHSC – University Hospital. He passed very peacefully with his daughters by his side and with support from an excellent team of doctors and nurses ensuring his comfort. Jerry was predeceased by his beloved wife Eleanor in January of this year. He was the eldest son born to Bill and Evelyn McGrenere on August 14, 1929. He was the second oldest of nine children. Jerry was the cherished brother of Tom (Gwen) McGrenere, Joan (Lou) Collier, Noreen Addison, Barbara Forsdike, and Bob (Melanie) McGrenere. He was predeceased by three other sisters – Florence (Pat) Kelly, Mary Helen McGrenere and Marie (Danny) Beaghan. Jerry is survived by six children – Sue (Rob) Downie, Patti (Gary) Miller, Mary Jo (Wayne) Stone, Kim McGrenere, Craig (Michelle) Rose and Chris Rose. He was also the proud grandpa to 12 grandchildren Rachel (Rebecca) Downie, Jonathan (Gemma Styling) Miller, Jordan (Jodi Freeman) Miller, Katie Miller (Phil Vergilio), Brian Chiasson, Jaxson and Jett Rose, Christine Stone, Julie (Jerry) Blizman, Karen Stone, Lisa Marie Tillman and Derek (Jennie) Haight. His great grandchildren include: Bennett Miller (Jordan and Jodi), Nova Vergilio (Katie and Phil), Tyler, Mason, Parker (Julie and Jerry), Ryder (Karen Stone) and Hudson (Lisa and Cory Tillman). With a family of this size he was also an admired uncle to very many nieces and nephews, each of whom have their own special memories of their “Uncle Jerry”. Jerry’s long career with the Canadian Pacific Railway (1950 to 1990) afforded him a rich variety of experiences and acquaintances up and down the rails. He started an impressive career with the C.P.R. from the London Yard on Quebec Street and ended with a stint on the Go Trains based out of Campbellville and running daily into Toronto and back. For many years he was a union representative and offered both his wisdom and support to his colleagues in the railroad family. Jerry loved people and was always eager to learn new things and experience the world at large. He was a huge fan of baseball (Go Blue Jays!), golf, hockey, euchre, poker, cribbage, bowling, lawn bowling, fishing, cottage time and driving his car everywhere there was a road! Jerry’s inquisitive nature and love of life made him a grand adventurer. He travelled extensively throughout his lifetime and as a man forever on the move, he was dubbed the “Roadrunner” by his family. He could brighten any moment with his quick wit, delightful sense of humour and easy going manner. He was accepting of everyone and always made people feel they were important. Even in his advanced age, he could recall details about things that would challenge most of us on our best days. We will miss him terribly but will always be blessed and empowered by the strength he gave us with each and every encounter. Bless you Dad (Jerry) for all you have contributed to so many. You are a special soul who is loved and will be missed far more than you could ever imagine! Due to the COVID restrictions there will be no funeral service or visitation at this time. A Celebration of Life event will be arranged for immediate family in the near future. Details to be announced. Jerry’s family would be most grateful if you would visit the Mount Pleasant Cemetery website to share your memories and condolences for this wonderful man. Mount Pleasant Cemetery (London) Inc. www.mpcemetery.ca