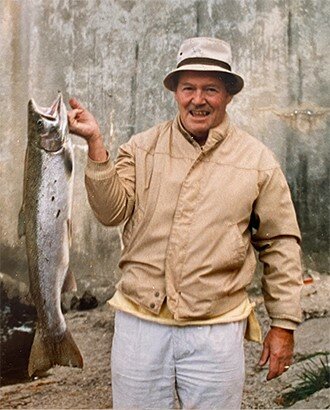 Hay, James Reginald peacefully in hospital in his 92nd year. Beloved husband of Joan, and much loved father to Denise and Megan (Brad), all of London, Ontario. Predeceased by son, Tom. Cherished grandfather to Jaimie (Kris) and Emma, and great-grandfather to Brayden and Makenna; equally cherished little brother to Pat Gloin, of London Ontario. Jim was born in Calgary, Alberta and spent his first years in Coleman, Alberta, then fetched up in London, where he got a job out of high school as a mail boy for Reliance. He swiftly proved himself and after moving up the ladder at Reliance, then Supertest, became head of data processing at the London Free Press in 1967, where he enjoyed a rewarding career until his retirement, with a band of eccentric co-workers who have collectively provided us with enough stories of mischief and shenanigans to last us a lifetime. Jim (never James or Mr. Hay to anyone) lived a long, full life, troubled only by serious illness in the last few years. He was still golfing in his mid eighties, and continued to devour books right to the end. He enjoyed woodworking in his basement, providing tables, shelves, mailboxes and piano stools to anyone who needed one. He discovered lathe art in retirement, which turned into a passion for many years (and effectively made the ping-pong table useless). Many of his art pieces were sold in Tobermory on the Bruce Peninsula - the Bruce held a special place in his heart his entire adult life - as well as through a gallery in Byron. He could make anything and fix anything, and was called upon constantly by his kids to do so. He knew Joan from the time they were six years old, she living on Riverview and Jim situated across the road on Stanley Street, and from the time he stuck his disembodied head through the railroad tracks of the trestle bridge at Wharncliffe to scare Joan and her friends (which he accomplished, to his great satisfaction), he knew she was the one for him. They married in 1953 and were never apart; he simply didn’t know what to do with himself without her, and they had nearly 70 years of devoted marriage. Jim was an avid fisherman and golfer, and could operate any piece of machinery, read a book in two hours, furnish you with facts and statistics that, if you didn’t check too carefully, were always impressive, recite The Ballad of Sam Magee (the first verse just repeated), play any sport, stretch a joke out into a test of wills, and make sure you knew he loved you. We miss him terribly. Donations can be made to the Canadian Heart and Stroke Foundation. Cremation has taken place; there will be no service. Online condolences may be made to www.mpcemetery.ca Mount Pleasant Cemetery (London) Inc., London, Ontario.

Share Your Memory of
James
Upload Your Memory View All Memories
Be the first to upload a memory!
Share A Memory