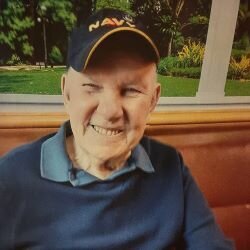 Surrounded by the love of his family, James (Jim) Edward Heslop passed away peacefully at Dearness Home in London, Ontario on September 13th, 2022. Born in London, Ontario on November 21st, 1939, to the late James and Mary Heslop, Jim has finally joined his loving wife of 61 years, the late Bette Heslop (nee Fraelic) for the next step of their journey. Jim is survived by his loving children Rob and his wife Karen, Jim, Debbie and her husband Steve, and Suzie and her partner Shawn. Jim was an extremely proud grampy to 12 grandchildren, Terry, Beth, Vanessa, Lindsay, Brent, Joey, Shannon, Stephanie, Lauren, Kyle, Rachel and Curtis. He was also a loving great-grandfather to eight great grandchildren, Ethan, Evelyn, Olivia, Zolika, Logan, Henry, Lawson and another boy joining the family in October 2022. Jim will be sorely missed by his nine brothers and sisters and many nieces and nephews and their families. Jim is predeceased by his brother John and sister Doreen and his loving in-laws Curtis and Hilda Fraelic of Nova Scotia. Jim will also be missed by the many cousins and friends he was so honoured to have had part of his life. In his early years, Jim worked tirelessly with his father and brothers at Heslop Auto Wreckers in London, Ontario. In August 1958, Jim would proudly join the Royal Canadian Navy at HMCS Prevost, an adventure that would take him around the world including Nova Scotia where he met the love of his life Bette. These years in the Navy not only brought him Bette and his Nova Scotia family but also cemented a lifelong love and longing for Nova Scotia and the joy of being on the water, something he was glad to share with his family and friends. The Navy would provide years of stories that he was always willing to share with anyone around him, time and time again. Throughout his time in the Navy, Jim received the rank of Petty Officer Second Class and served on a number of ships including the HMCS Bonaventure, HMCS Haida and HMCS Stadacona. During his tour of duty, he had the opportunity to serve as Her Majesty, Queen Elizabeth II’s honour guard. After being honourably discharged in August 1969, Jim and Bette moved to London, ON, where Jim would go on to work for GM Diesel until his retirement in 1999. There is not a train that passed through that shop that Jim did not have a hand in painting. While at GM, Jim also had the pleasure to paint the first ever LTC bus that came off the line. Jim touched the lives of all those around him through his participation in coaching hockey with Red Circle Hockey Club and in his later years with the Royal Canadian Sea Cadets Corps Courageous at HMCS Prevost. Jim was an avid woodworker who happily and proudly showed his many grandchildren the ways of the woodshop, building tables and chairs, can crushers and castles to name a few things. His family will remember Jim as a man who always had a story or great advice for those around him and a man who put too much sage in his turkey stuffing. He was a lifelong Toronto Maple Leaf fan and no matter the outcome of the season there was always next year. One ice cream always tasted like another, and sour cream and onion chips always had to be accompanied by dip. He was a staple in his neighbourhood when living on Duncan Lane and could always be counted on for a great Christmas display and the neighbourhood grandpa who could fix everything. We as a family find comfort in knowing that Jim is once again reunited with his loving and sorely missed wife Bette. The family would like to thank the staff at Dearness Home in London, Ontario for their dedication, care and comfort over the last year. Cremation has taken place and a Celebration of Life will be held on Saturday, September 24th at the HMCS Prevost, Ward Room at 19 Becher St, London, Ontario, from 1:00-3:00 p.m. with a light reception to follow from 3:00-5:00 p.m. In lieu of flowers, donations can be made in memory of Jim to organizations that meant the world to him, including the Navy League of Canada - London Branch, at 19 Becher St., London, ON N6C 1A4, AboutFace.ca, and the Canadian Diabetes Association. Online condolences may be made at www.mpcemetery.ca Mount Pleasant Cemetery (London) Inc. Ready Aye Ready sailor.

Share Your Memory of
James
Upload Your Memory View All Memories
Be the first to upload a memory!
Share A Memory