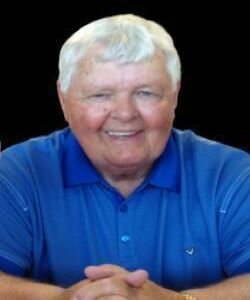 In memory of John Ellsworth Rogerson 1945-2022 Port Franks John passed away at Strathroy General Hospital, with family by his side, on Tuesday September 27th, in his 78th year. He leaves behind his tap-dancing wife, Ruth Anne Rogerson (O’Farrell) and his loving children Tamara Lechner (Paul) and Jonathan (Leigh Sheppard). Loving grandfather to Kilee, Andrew, Tygre, Annica, Maddox, Cameron and Braxton. Brother of Bob Rogerson (Karen) and Mary Lynne Hinton. Brother-in-law to Peter and Nancy (O'Farrell) Vidler. Loved by his many nieces and nephews Andrea, Kristen, Jason, Leigh Anne, Jennifer, Andrew and Matthew and many great nieces and nephews. Predeceased by his parents Ellsworth and Kathleen Rogerson (Jack Fitzallen), his in-laws Margorie and Stan O’Farrell and his brother-in-law, Art Hinton. Born in London in 1945, John was an all-around athlete who played tennis, baseball, hockey and football with passion. He was a beloved member/board member of the Highland Country Club and was a respected jeweller who was an integral part of downtown London business community. He loved spending time at both the family cottage in Port Franks and golfing with the guys at Saddlebrook in Florida. He was the strong silent type with a unique sense of humour. John was a gentleman and a "gentle man" whose generous spirit led to involvement with many charities including the Boys and Girls Club, The Round for a Reason, and Cystic Fibrosis Foundation. He will be greatly missed. In keeping with his wishes a Celebration of Life will be held Monday October 3rd from 1-4pm at Forest Golf Club (102 Main St S, Forest ON ) and cremation has taken place. As an expression of sympathy, donations in memory of John can be made to The Boys and Girls Club, The Kilee Patchell-Evans Autism Research Group or The Canadian Cancer Society. Online condolences may be made at www.mpcemetery.ca Mount Pleasant Cemetery (London) Inc.

Share Your Memory of
John
Upload Your Memory View All Memories
Be the first to upload a memory!
Share A Memory