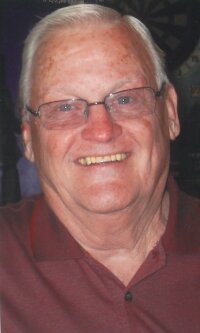 Passed away peacefully in his 90th year, on October 8, 2022, at Elgin Manor surrounded by family. He was the beloved husband of Coral; guiding father of Lorraine McElroy (Gerry Hensels), Bill and Greg (Karen). Proud grandfather of Gregory, Bradley (Lindsay), Rob (Carlyn) and Erin DeJonge (Josh); as well as great-grandfather of ten. Predeceased by his brother Tom (Annette) and son-in-law Scott McElroy. Bill will be fondly remembered by his nieces, nephews, extended family and a circle of friends. After moving from Leaside in his late teens, Bill continued to pursue his interest in hockey, playing for the Lou Ball Jrs., Strathroy Rockets and St. Thomas Royals as an accomplished athlete. His passions were family and vacations with them for 27 summers on the South Shore of Nova Scotia where he set many lobster traps. He enjoyed time with friends at “The Shack”, a men’s club of which he was a founding member. After retiring from Bacardi Rum Canada Bill and Coral wintered in Gulfport, Florida for twenty years. A memorial Celebration of Life will take place at the Lambeth Legion, 7097 Kilbourne Rd., on Sunday, October 30, 2022 from 1:00 - 4:00 p.m. If desired, donations in Bill’s memory may be directed to McCormick Dementia Services or the Charity of your choice. On-line condolences may be shared by visiting Bill’s Tribute Wall at www.mpcemetery.ca