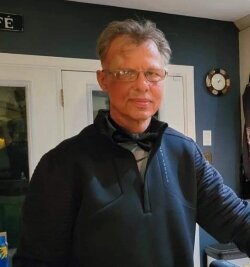 With profound and deep sadness, the family of Thomas Van Newman (Tom) are announcing his passing on October 25, 2022. An adored father, husband, brother, uncle, and friend. Son of the late Koosje and Keith Newman. Loved husband of Heather. Dedicated father to Kathryn (husband Josh Suhanji), Julie (fiancé Jake Stolee), and Adeline (partner Eric Waschenko). Loving Opa to Bellina “Little B”. Brother to Bob, John, Jim, Gary, Mike, and Steve. Tom showed his athleticism at an early age playing hockey on his parents' backyard ice rink. Later on, Tom played for the St. Thomas Colonels, followed by the Guelph Holody Platers where they won the provincial championship. He was drafted to the Ottawa 67's and then later played for the Soo Greyhounds and the St. Marys Lincolns. After retiring from hockey, Tom went on to work as an accountant and then worked for Kellogg’s for many years. Later in life, Tom graduated as a medical technologist. Tom also loved his time working for Greenhills Golf Club and Total Tennis. He was an avid cyclist and swimmer, and a passionate lover of music. He was very loved by his family and friends and he loved them back with the same passion and intensity. Tom’s constant optimism and sense of humour will be greatly missed. There will be a private family service, followed by a celebration of life in January 2023. Those wishing to make a donation in Tom's memory are asked to consider Hockey4Youth.org. On-line condolences may be shared with the family on Tom’s Tribute Wall by visiting www.mpcemetery.ca Mount Pleasant Cemetery (London) Inc.

Share Your Memory of
Thomas
Upload Your Memory View All Memories
Be the first to upload a memory!
Share A Memory