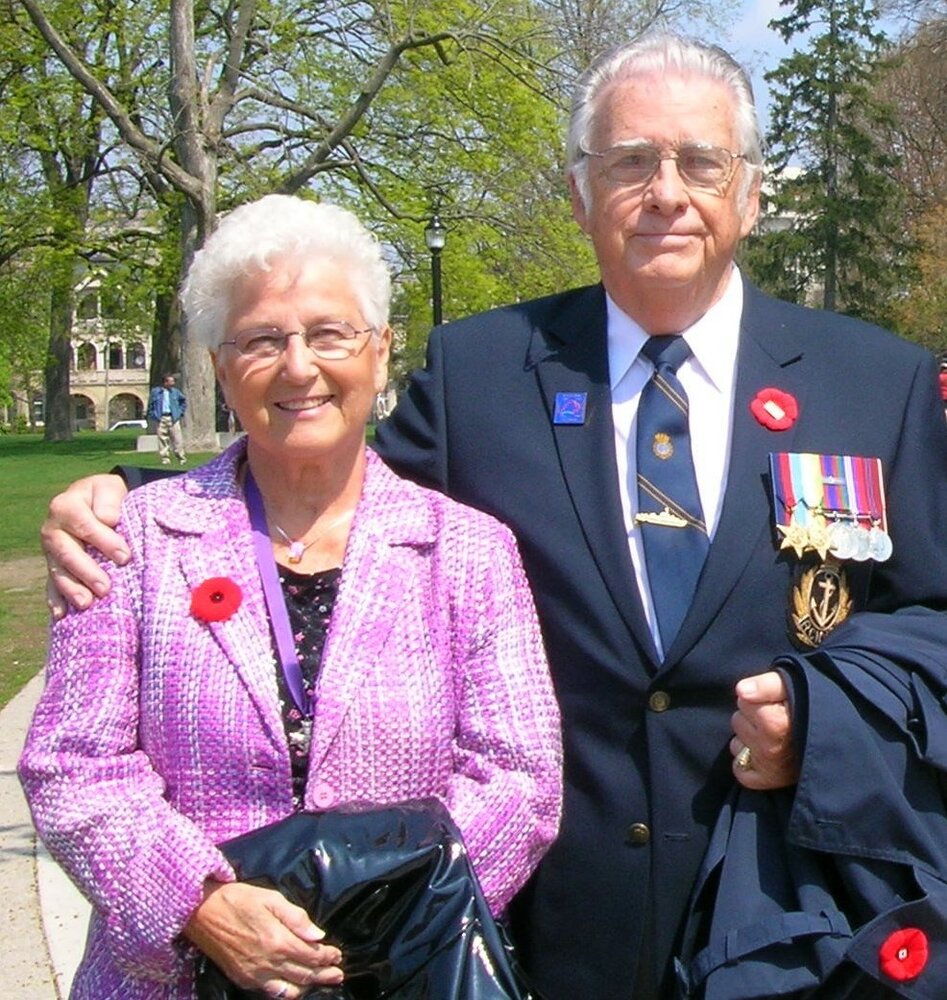 With the love of his family surrounding him, and with profound sadness, we announce the passing of Bill Weir on October 28, 2021 in his 95th year. Predeceased by his precious wife, Shirley (2017). He missed her so. Bill was the son of the late Clifford and Murielle Jane Weir. Cherished father of Rick (Lisa), Jackie Vettor (Peter) and Bill (Lisa). Proud grandfather of Bradley, Andrew, Fraser, Benjamin, Danielle Donovan (Rob), and Samantha Weir (Josh Brown). And recently he was delighted in the addition of twin great-grandsons Jack and Brody Donovan. Bill was born in London in 1926 and, except for his WWII service, he lived his entire life in London. As fond memories, Bill often talked about his experiences as a Sea Cadet at London’s HMCS Prevost and he would remain a supporter his entire life. In 1943, Bill enlisted at the young age of 17 (as so many young men did at the time) and joined the Royal Canadian Navy. He served out of Halifax patrolling the coastline including in and around the St. Lawrence River. But mostly he was on convoy duty in the North Atlantic escorting and protecting various ships crossing the ocean. Bill fought The Battle of the North Atlantic until the end of WWII. Often he recalled thinking he would never warm up after smashing layers of ice off the ship as the waves kept coming. He called 3 ships home but he considered HMCS Lockeport to be the ship that brought him through. In 1949 Bill married Shirley, his best friend and love of his life. After raising their three children they really started travelling. Cruising to faraway places (Greece, Europe, Australia and the South Pacific) to name a few. Later on, their motor home became their passion including many fun filled years as 'Winter Texans' in Harlingen ,Texas and then 'Snow Birds' in Panama City Beach, Florida. They developed many lifelong friendships along the way. Shirley and Bill loved to dance. Throughout the years, venues like The Stork Club (Port Stanley), The London Arena, and Wonderland Gardens were favourites. When they joined the dance floor to 'jitterbug', the crowd stood back. After Bill returned from the war, he worked in sheet metal, then moved on to working in the insurance industry ultimately opening his own agency. Through these years, Bill was a member of the Oakridge Optimist Club and when his sons were playing hockey, Bill coached a team or two. Bill was a member of the Royal Canadian Navy Volunteer Reserve (R.C.N.V.R.); and the Royal Canadian Airforce Association, 427 (London) Wing. Sincere thanks to the compassionate at home care from the Home and Community Care Support Services professionals over the last few months, particularly St.Elizabeth nurse Athily; and all the Ultima PSWs, particularly Amber. Dr. Cathy Faulds’ home visits and ultimately her Parkwood Hospital Palliative team were such a comfort. Cremation has taken place. Due to Covid restrictions, there will be no funeral. A family inurnment will take place for both Bill and Shirley together. For those wishing to make a memorial donation in Bill’s name, please consider The Salvation Army. Online condolences may be made to www.mpcemetery.ca Mount Pleasant Cemetery (London) Inc., London, Ontario.