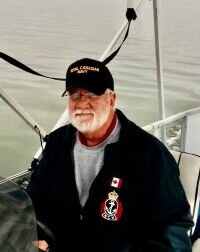 George Alfred Bullas, in his 83rd year, passed away peacefully at University Hospital after a lengthy illness, on Saturday, January 14, 2023, with his wife and son by his side. He is survived by his loving wife, Anita Rasmussen, and his children, George Bullas (Renee) and Sue Bullas. George will be lovingly remembered by his two grandchildren, Dylan and Abbigail. He was predeceased by his parents George and Grace and brothers Len and Gary. He will also be mourned and remembered by many family members and friends around the world who cherished his sense of humour, knowledge, and compassion. George had a successful career as a teacher and an administrator for the Middlesex County Board of Education and the Thames Valley Board. George was a man of many talents. He was a photographer, an environmentalist who focused on raising monarch butterflies, and a genealogist. Born and raised in London, George spent many happy years in his beloved Long Point, where he was a permanent resident for over 30 years. The years he spent in the Navy Reserve fostered a love for and skill in boating. George was passionate about travelling, and he and Anita travelled the world on four continents, spending the past several winters in Portugal and Florida. The family wishes to extend a heartfelt thank-you to the staff at Manor Village Retirement Home and the Emergency and ICU Departments at University Hospital. George’s stay was brief, but your care and compassion were outstanding. Cremation has taken place at Mount Pleasant Cemetery. Online condolences may be made at www.mpcemetery.ca. A Celebration of Life will take place at a later date. Donations to honour George’s memory can be made to the following charities: Heart and Stroke Foundation, the LHSC Foundation in the area of Clinical Neurosciences or the RTOERO Foundation for research and education in geriatric medicine, or a charity of your choice.

Share Your Memory of
George
Upload Your Memory View All Memories
Be the first to upload a memory!
Share A Memory